Swedish Hotel Provides Down Jacket to Withstand the Cold

A snow and ice experienced hotel was launched in the Lapland which is 125 miles (about 200 km) north of the Arctic Circle.

Annabel Fenwick Elliott, a traveler in the UK’s Daily Mail, has recently experienced a snow and ice hotel in the Lapland area of 125 miles (200 km) north of the Arctic Circle. 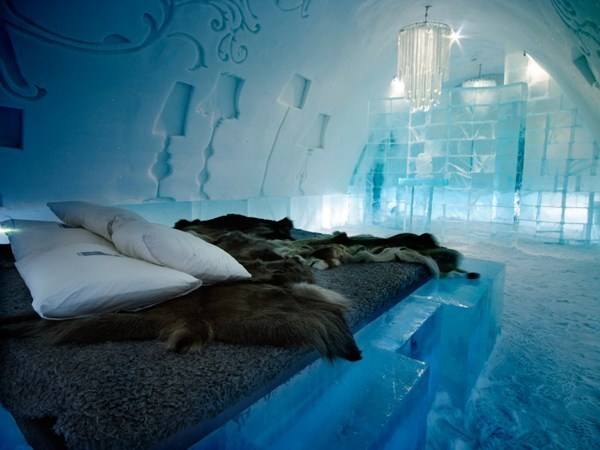 The history of the ice and snow hotel has a long history, now all over the world. As early as 1989, a Swedish store put forward the concept of the construction of ice and snow hotel, although it was not recognized, but later, his idea was a great success. After every winter, thousands of artists and architects came to the cold towns in northern Sweden, building magnificent palace-like ice and snow hotels.

The ice and snow hotel consists of two oval-shaped hall and some sporadic cottages. The lobby includes a restaurant, a bar and a bedroom. Sporadic hut is used to place luggage. As the hotel temperature is in minus five degrees, the hotel also specifically provide a special suit down jacket to withstand the cold for the guests.

It is reported that the cost of living the hotel in the 220 euros to 1000 euros (about 1,600 yuan to 7300 yuan) between, really a lot of money. But when asked not worth it, Anna replied: “Of course it is worth, if she can, she is willing to come again.” The good news is that this year, when the rest of the hotel melts in the summer, one of the halls will be kept in the whole year.

For more testing instruments of down jacket and its thermal resistance performance, checking Sweating Thermal Guarded Hotplate for more details.