You may be a bit of a stranger when it comes to the IEC（International Electrotechnical Commission）, but when it comes to the glow wire (GWT) test, everyone in engineering plastics should have heard about it. We will use diagram to introduce glow wire test which is very normal for electrical appliances. And we will focus on the three subjects below:

The scorching wire test is a mandatory test for unattended electrical appliances. Its standards and testing methods are formulated by the IEC, which is one of the important standards for the export of electronic products to the European market.

Please note: this test is mainly for products sold in the European market, as the IEC is based in Europe (Geneva, Switzerland) rather than the United States.

The GWT we mentioned is actually made up of three tests in the IEC60335 standard (GWIT, GWFI, GWT), which are somewhat similar, but not the same. Therefore, GWT is a bit more complicated than UL flame retardant tests.

For pre-selected tests and test flow chart, you can find details in the following diagram. 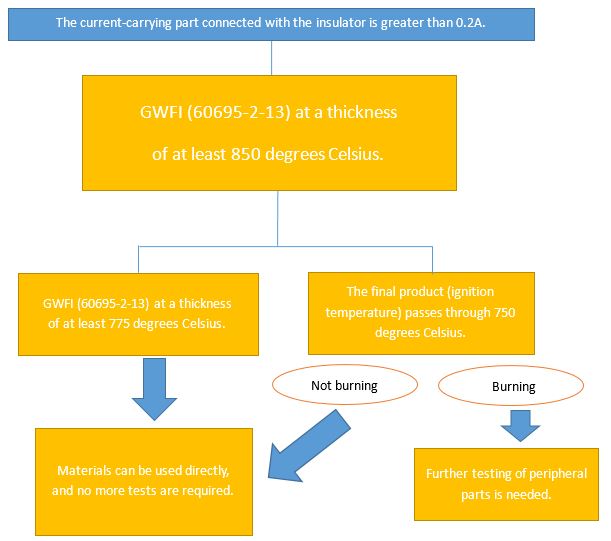 The conclusion drawn from the above diagram is:

First: As long as the working current is greater than 0.2A, the unattended electrical appliances shall pass the test of IEC 60335. GWFI is one of the preselected tests for materials, and then you can do the GWIT or GWT tests.

Second: After passing the GWFI test , you can pass either GWIT(on the standard spline) or GWT (on the wip). If not through GWT 750℃ appeared, surrounding the remedy is to other components for further testing.

Glow wire tester which is also referred to glow wire test apparatus is to test electronic technical products with regard to fire hazard is to duplicate exactly conditions occurring in practice. A loop of resistance wire is electrically heated to a specified temperature and the specimen being tested is brought into contact with the heated wire with a defined horizontal loading which is simulating as closely as possible actual effects occurring in practice. 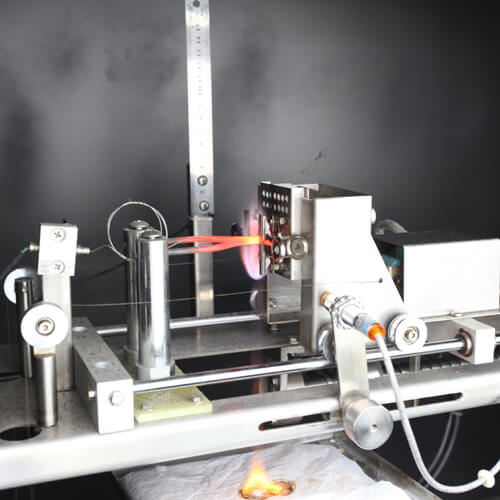 GWIT is the burning temperature of the glow wire–Meet IEC60695-2-13 standards.

The test method is: The temperature is 25K (30K above 900℃ ~960℃) higher than the maximum temperature at the top of the glow wire which does not cause ignition of the test sample of specified thickness for three consecutive tests.

Simply put, as long as it does not ignite at the test temperature (three consecutive samples) , then pass the GWIT test (report temperature to add 25℃ and 900-960℃ test to add 30 ℃).
For example, for 3mm thick test samples, the test temperature is 725 degrees. GWIT:750/3.0 mm（Pay attention：750℃=725℃+25℃）
Note: The so-called ignition, IEC for GWIT regulations, refers to the combustion time more than 5 seconds before ignition, that is, as long as the flame does not exceed 5 seconds are non-ignition. Pay special attention to this! Refer to article 3.2 of specific clauses:

Ignition: flame that persists for longer than 5s.

A GWIT test report should contain the following contents:

GWFI is the flammability index of glow wire — conforming to IEC60695-2-12 standard.

The test method is: the maximum test temperature of a specified thickness sample in three consecutive tests and the test wire needs to contact 30 s (Penetration time), and then leave. One of the following conditions should be met:
a) The flame or heat of the test sample was extinguished within 30 seconds after removing the hot wire, and the wrapping silk paper placed under the test sample did not ignite.
b) The test sample has no ignition (that is, never burned).

A GWFI test report should contain the following contents:

The test method is the maximum test temperature of a test product (non-standard spline) of specified thickness in three consecutive tests, which should meet one of the following conditions:

1.Products do not ignite.

2.Though ignited, it is extinguished within 30s after the hot wire has left, and does not ignite the wrapping paper under the product.

It should be emphasized that the IEC clearly stipulates that as long as the product does not ignite or is extinguished within 30 seconds after the hot wire leaves, there is no requirement for extinguishing within 2 seconds. The so-called 750℃ 2S extinguishing requirement is a self-determined standard for individual enterprises, non-IEC mandatory standard, this point should be paid special attention to. 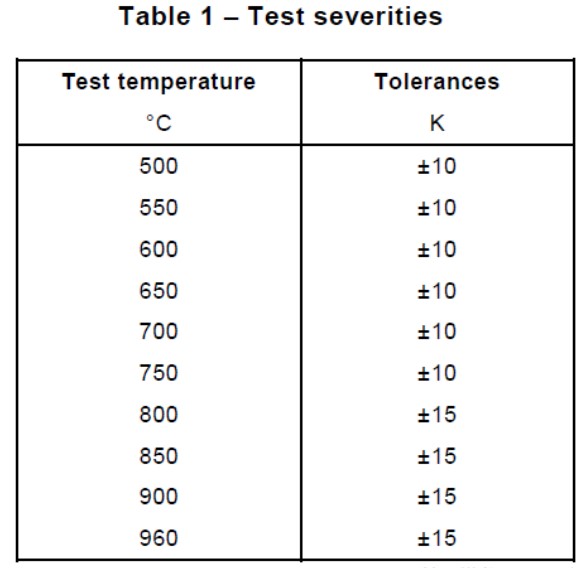 GWFI and GWIT are for standard splines (thickness and size requirements are as follows). GWT is for products, its size (area) is also specific requirements. The facade less than 15 mm in diameter greater than 8 mm in diameter is designated as small Parts in IEC standards, which can be used for GWT testing, but if some products are more than 15 mm in direction, but some are less than 8 mm in direction (too narrow), then this can not be tested, as shown in the following diagram.

The GWT can be tested on the left side of the image above, and the artifacts on the right side are too narrow to be tested.

Again, the author studies IEC 60695 second times standard many times. There is no provision in the whole article: GWT requires 750 degrees centigrade and extinguishes within 2S. This should be individual enterprises in order to improve standards and self determined, non IEC mandatory standard.