Home News and Events A New Sportswear with the Breathable Fabric

A New Sportswear with the Breathable Fabric

Researchers through the printing of the bacterial cell layer built in the latex, the lower contact with the skin that layer is a supportive frame structure, allowing the internal cell layer to perceive the skin temperature and humidity. (How to measure the temperature and humidity micro changes of the wearing garments? checking sweating thermal guarded hotplate for more details.) The biocomposite latex-cell material is made into a garment flap, the flap is designed according to the body’s sweat and heat distribution, with different sizes, scattered on the back of the garment. 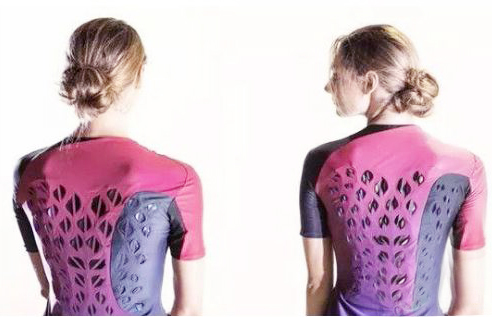 Within this garment, live Bacillus subtilis cells perform the dual functions of sensors and actuators, which do not require any external force to sense the surrounding humidity and heat, thereby affecting the arrangement and contraction of the bacterial layer. When wearer sweats, the bacillus in the garments shrinkage changes can drive the flap to open, so that the sweat can be good evaporated; when the body cools down, the bacillus will drive the flap off. When test staff wears the clothing after five minutes, the flap began to open, just as the real skin is generally “smart” pores open and close.

The overall performance of the fabric and bacterial cell layers did not decrease significantly after the researchers performed 100 open / closed tests on artificial conditions.

The researchers also designed a prototype based on these ventilation running shoes, shoes and feet in the soles of the soles, the researchers set a number of downward bending of the wings.
In fact, these microbes are safe, and based on the current genetic engineering means, can make it achieve large-scale production.